The Best Award Ever (And it’s all mine!)

I was recently awarded what is, in my humble opinion, the best award ever. EVER. EEEEEVVVVEEEER. (Insert Sandlot flashback here). You all read Cation Designs, right? Yes, of  course you do, because Cindy Chan is an inspiration to us all. She got me reading the Hunger Games (um, sometime, in the future, after I finish every other book littering my tiny apartment. I swear it’s like 10% me, 35% sewing stuff, 5% Cadfael, 50% books.) She makes corsets. She makes dress after perfect fantastic dress. She embroiders Miyazaki characters and maps of Middle Earth. She’s posting a poem a day for National Poetry month AS WE SPEAK. She is a sewing rockstar, and everyone should be aware of that, and act accordingly.

Oh, and she has a cat named Walnut. Walnut is a majestic beast, long-haired, noble-eyed, bursting with grandeur and fur. And because Walnut, with his curiosity and claws, is all up in her sewing business, she has created an award, The Sewing With Cats Award:

It’s a tribute to all of us whose lives are made both better and worse by our feline companions, specifically when it comes to sewing. And I must say, Brother Cadfael has his good days and his bad days. Sometimes that pile of fluffy tissue (i.e. a pattern) holds his fascination and sometimes he couldn’t care less. Sometimes that neatly laid out fabric is OBVIOUSLY a cat bed and sometimes he disdains it, preferring my actual bed. He’s a wild card, that guy. For example, he recently became interested in my sewing machine:

And sometimes he wants to lie down on patterns: 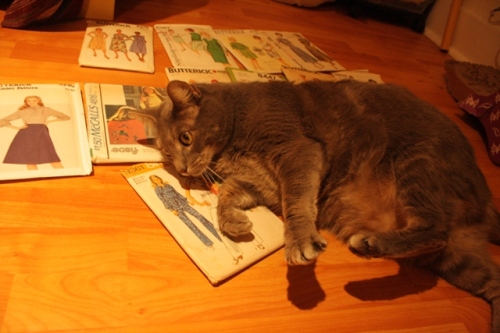 Of course, he’s always happy to help with pattern drafting: 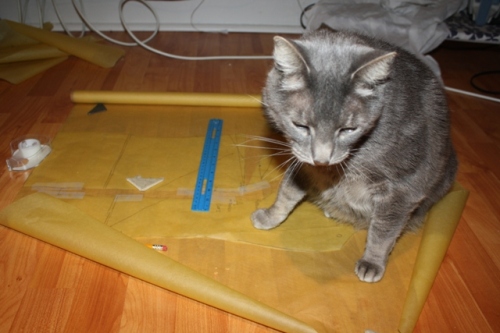 He’s an expert on the full bust adjustment. But mostly he just likes fabric: 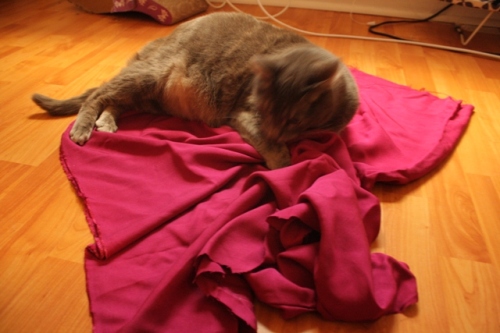 Just try to be mad at me when I look this adorable. Just try.

Of course, special mention must be made of some other guys, specifically Falco and Morse, who absolutely had to join in the Passover Seder: 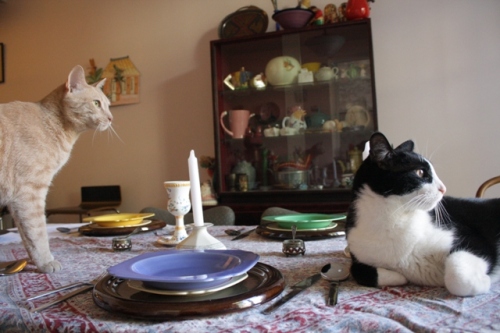 Hey! Is that Elijah?

Where is my wine?

Life with cats. It’s like living with tiny fluffy dictators.

Oh, PS: Just so you know, sewing is happening. I’ve made 5 garments in the last few weeks but of course the devil is in the photos! And the weather. I really gotta stop making sundresses in 50 degree weather. But I’ve completed my Truffle and Pastille Dresses, another renfrew, a t-shirt and a skirt. It’s all coming, people, I promise!