The Ants in my Pants Pants

I would not say I am one for crazy pants. We live these days in a crazy pants world, and I think that’s wonderful, but crazy printed pants have never drawn me into their brightly becoming arms (legs?), probably because I’m already a prints person with closet full of printed tops and despite what the runways and Pretty Little Liars seem to want me to believe, pattern mixing is not my thing. So I need SOMETHING to be plain, or at least, matchable, and that is usually the job of pants, to my mind. Not that I wear pants much, to be fair, but when I do I tend to want something basic. Pants are sort of like giving up for me, if I’m being honest. Pants are something I wear when I can’t figure out something cute, and I just throw up my hands and think well, I guess it’s PANTS today, way to let yourself DOWN, Leah, way to let the TEAM down. I don’t know what team this is supposed to be, but in my head those sad mornings it’s quite clear.

I know that this isn’t everyone’s philosophy. In fact, I think most people I know prefer pants to anything else. Especially jeans. I own two pairs of jeans. I rarely wear either. It’s a good thing I’m moving from the States because I believe this is grounds for treason here, not wearing jeans much. At the least, it’s deeply unpatriotic. Although since denim became popular in India it might even rival our own devotion, check out these sad 90’s monstrosities:

Or this more modern negative situation:

This actress’ name is Kangana Ranuat and she is very talented and she is better than this.

Yeah. So maybe I will be even stranger to the general public once I’m there, but I have to be what I am and live my life, and that’s a life with minimal pants. That all being said, I did recently make a pair of pants that I could not be more into, and not only are they not plain, they are insanely printed. And yet? I love them. I love them so much that they give me ants in my pants and I need to dance.

Yes! See? CAN’T STOP THE DANCING. Could barely stop to take these photos! These began as a love affair with fabric. I saw this fabric on  GirlCharlee.com (yes they have wovens now I don’t know what to do with myself).

See? Look at that face. That is the face of someone dancing on the inside.

The pattern is the Colette Patterns Clover. I gotta made a different pants pattern, guys. I’ve made this so many times. I need something new. I HAVE many other patterns. I should made some of them! I’m going to make these next. Maybe this is why I’m not as into pants? No. Probably not. ANYway. The Clover pattern ain’t broke so yeah….

This fabric is just, I can’t stop loving it. It reverses everything I’ve ever felt about printed pants, on myself, and on others.

The Clover is something I can kind of make in my sleep at this point, and I always make a size 6, and that’s what this is. I did, as I always do, flat felled seams on the inner thighs and crotch, and french seams on wide side-seam. 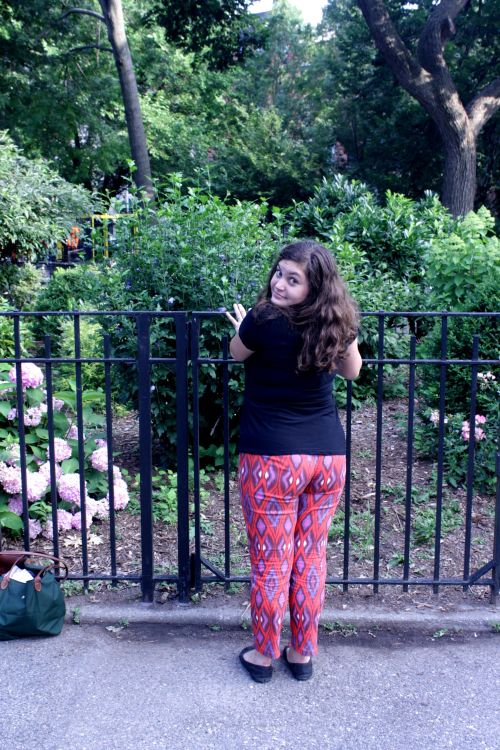 A little rear view for those on the internet who would like to see that. YOU’RE WELCOME, creepy guys googling 90’s Bollywood images! Take that!

I also made the shirt! It’s a plantain. Boy, this outfit is like a double tried and true combo.

And because it’s a typical outfit, I have to do a typical jump shot!

BOOM. Pants I love and don’t even feel bad when I’ve chosen to wear them. Pants that don’t make me feel like I’m giving up! Boom.

Do check out my Etsy Shop for new (old) vintage pattern listings! I gotta unload these before I move, people, I can’t take ever pattern I own to India, I think the Indian Government will suspect a new and entirely inefficient form of colonization.

I love my birthday. I truly do. There is no real reason for me to love my birthday, honestly, and yet, there you are. I can’t say I’ve ever had a magnificent birthday, like a truly epic life changing birthday, probably because I’m not a billionaire and can’t fly all my friends all over the world. I wanted to find a link about a news story of someone who has done this but I couldn’t which leads me to believe that these billionaires are not doing what I would do in their position. Fools. It’s all lobster parties in the desert and inviting Lindsey Lohan, according to the google, and both of those seem like a recipe for getting someone sick. I would do it all so much better if I was that rich. Someday I will BE that rich, just so I can throw better birthdays than the immensely wealthy people who have come before me.

But until that day comes, I will just enjoy my birthday the way it has been in recent years, at a bar, surrounded by nice friends who all buy me glass after glass of white wine (because my birthday is in the summer, duh) until I end up telling everyone how much I love them and begging someone to go get me some pizza. What can I say, I like to keep my birthday fresh. And I always try to make a new outfit, to make myself feel special and to force everyone to compliment me in a subtle way. Hey, if you can’t manipulate your friends on your birthday, when CAN you?

It’s been, I should mention, a month since my birthday. OY. Guys, I moved and Mr. Struggle left for India and my play opened (it’s up for one more weekend! Check it out here, it has a sewing theme so this shameless plug is justified). Still, I had such good intentions of posting this right after my birthday and that….is another dream deferred. Speaking of which, my birthday outfit, why was there none last year, you might be asking, or not, because you have better things to do than comb through my archives….Well, last year my birthday was cancelled because I got quick sick with a vicious summer cold and spent the night I was SUPPOSED to be hanging out with the people and the wine and the outfit compliments in bed instead, watching this popular 90’s Bollywood blockbuster which I declared, after all 3 hours of it, “was pretty good”, which Mr. Struggle took as a major compliment, considering my previous reactions to his 90’s Bollywood screenings. So there was happiness, true, but still, it wasn’t quite the birthday of my imaginings. So this year, I was determined to do it right.

And here is the outfit I chose to do it in:

Okay, so fun fact about this skirt, it’s a wrap skirt that I drafted and the first time I wore it it did a little warping on the left side (right in the photo) as you can see. After I washed it for the first time this issue had disappeared, so I’m not sure what that was about, you heavyish weight linen, you, but it’s all cool now!

See those little ripples? They look weird, but they are good now. As I mentioned, the skirt is self drafted and I got the fabric just ages ago from the sadly now defunct PA Fabric Outlet (sadness). It’s a nice little wrap skirt and I have to say, I don’t know why I waited so long to make a wrap skirt. This was literally my first one. WHY? I LOVE THIS SKIRT. I would invite this skirt to my birthday. IN FACT, I DID. 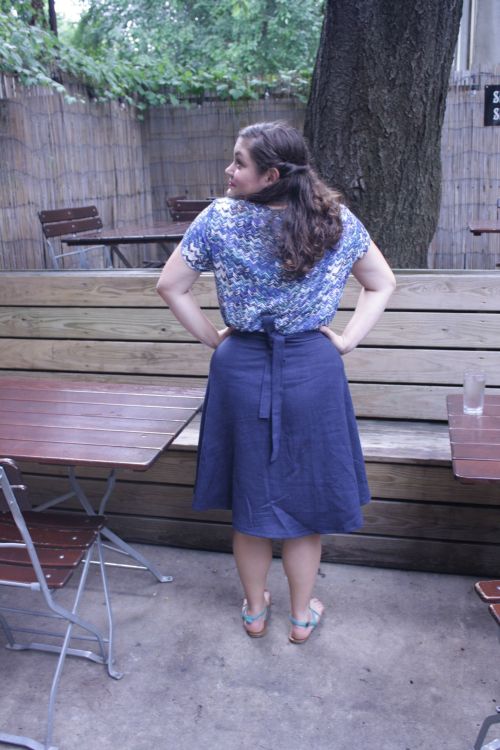 A little back view to show you the tie. I love this look! It’s so cute, I think, it’s so pseudo-40’s and wearable.

Oh, linen. You are so nice, but you wrinkle up so easy. Price I pay to remain breezy and cool, I suppose. I’m not really a perfectly pressed person, so I think it’s worth it.

Now, to the shirt! I made that too, and it’s my first ever Scout T-shirt by Grainline Studio. Oh, this pattern. So simple, a woven t-shirt, and yet so brilliant. I love it! I did alter the pattern a bit, because I was concerned by the bust measurement in the pattern versus the measurement of my own, well, sizable chest. This pattern has no darts or shaping, so I graded the bust measurement up, the waist down, and the hips slightly, so I think it’s like a 12-8-10 so that the final pattern can accommodate my, um, assets. 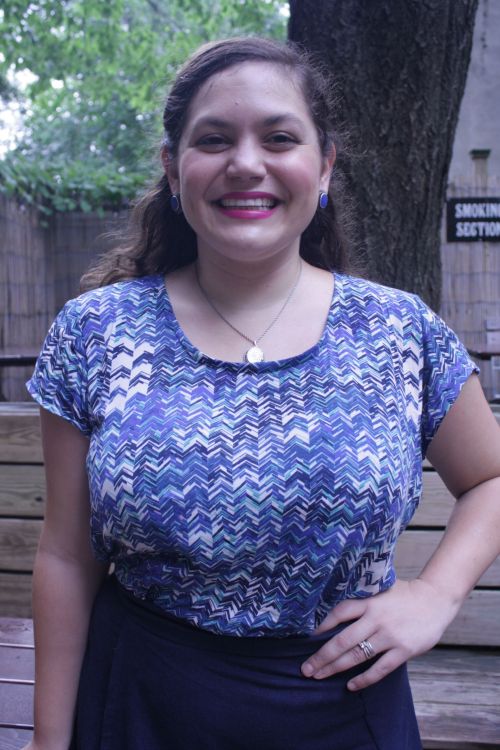 This fabric was a leftover from a dress I recently made. The photos of that were accidentally deleted so….enjoy this shirt!

And that’s about that for this. I remember taking these photos. I remember most of this evening, actually, it was super fun. There was a point at which I was telling Mr. Struggle that this thing I had to say was REALLY IMPORTANT over and over again without saying the actual thing and then I decided I should go to bed. Birthday? Resurrected. Boom.

Someday I will catch up on everything. Someday my life will calm down and I will get back into a normal blog posting schedule. Someday I will be a millionaire and I will fly everyone I know to cool places. No lobster, no Lohan. Someday.

Oh! And I’m moving to India myself, a little over a month from now, to join Mr. Struggle, which means I have to get rid of many things. So get geared up for giveaways and hop over to my Etsy shop to scope out patterns for sale! I will be updating it as much as possible, and I’ve put two new patterns up today, so enjoy!