The Market to Market Dress

I’ve made a lot of things so far here, and then the old problem of documenting them begins again.  But my New Year’s resolution is to post at least once a week, so let’s see if I can keep that, shall we?

I almost named this dress the Mangladas Market dress, but I didn’t, for reasons which will soon become abundantly clear.

Guys, you’ve probably never hear this before but India is an amazing place for fabric. I KNOW. I KNOW. It’s madness. I’m blowing your mind here. The thing is, before I moved here I had a very limited idea of what Indian fabric really looked like. We get a certain idea of a certain kind of fabric in the States, but that’s actually just a small fraction of the options. My Indian fabric education has only just begun.

Before I moved to India, I had a very specific idea of what fabric from India looked like. Once I moved here, I realized that I wasn’t wrong, per se, but I was limited. India is a land of major fabric production, and there is no one way to make fabric here, there are a thousand, and that’s just in one city. From North to South, East to West, the range of how fabric looks is wildly divergent. There are, of course, similarities, the material base is limited, mostly cottons and silks with wools in the far North, but the history of weaving in India dates back thousands of years, older than most other world civilizations. The Indus River Valley excavations show evidence of woven cloth and even some proof there was trade between China, India and the Middle East over 5000 years ago, which is fairly nuts, if you think about the fact that even today, Indian cotton production creates the most sought after products in the world.

Since I’ve been here, I’ve had a chance to visit the block printing museum in Amber (post to follow) and learned more about the printing techniques of the Northwest, which make up a lot of what I once thought Indian fabric looked like. The prints from Rajasthan come in many colors and shapes, but they are what I once believed the majority of Indian fabrics were, and I still have a huge adoration for them, despite all the others I’ve discovered. Recently, on a trip to Kolkata, I visited Dakshinapan Market, which I would recommend for any visitors to the city. It’s a huge government emporium, which means the prices are subsidized, and you can see goods and fabrics from all over the country. It was in Dakshinapan where I realized what came from where, what fabrics came from which part of the country. Although I gloried over the Bengali muslins, their high (and well deserved) price points made me sorrowfully put them aside in favor of other, cheaper, cloth. And luckily for me, I found some gems.

I wore this dress for the first time fabric shopping with my friend Natasha (hi, Natasha!) In Mangaldas Market, which is where I would recommend anyone go fabric shopping if the come to Mumbai. Hence the name. From one market to another, the fabric works.

Mangaldas is a little bonkers, but it’s fun, and filled with magnificent finds and amazing prices.

They are the damn best, with amazing options and tons of cool Japanese prints, which I can’t find otherwise.

Stores are divided between mens shirtings and suitings and womens stuff, but you can find amazing things at both.

I felt super cool wearing the fabric from one market at another. I made this out of my bodice block, with a gathered skirt and pockets. I cut the border off the side and added it to the bottom (side note, I do not understand the border printing on a lot of Rajasthani fabrics.) 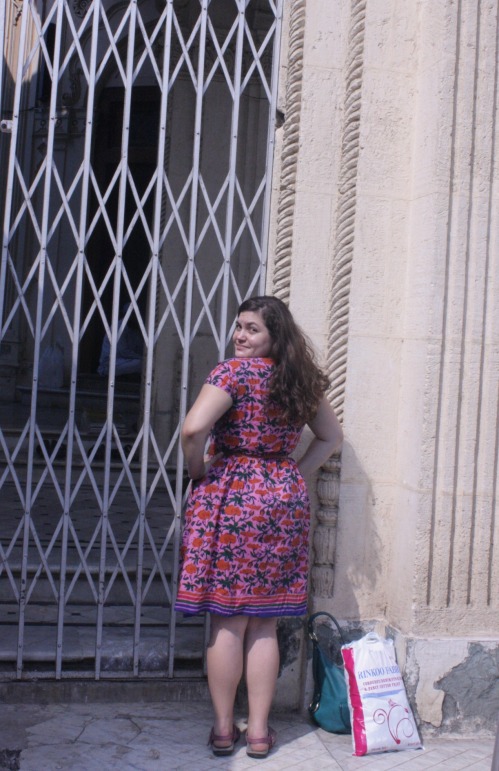 This is what happens when you try to take photos in Mumbai. It’s a fun place to live.

I may fall in love with a lot of Indian fabrics. I sort of already have. But I don’t think I will ever stop loving these Rajasthani prints. How could I? How could anyone?

Happy New Year, everyone! All my best for the year ahead!

Thanks for the photos, Natasha!

10 responses to “The Market to Market Dress”