Sometimes you love something no one else seems to love. I’m sure you’ve had this experience, right? You go to a museum (if you don’t go to museums, imagine you are someone who goes to museums. Also, if you don’t go to museums, out of curiosity, why do you read this blog? I’m one Rembrandt reference away from being a full on Rijksmuseum fan-girl page. Anyway, thanks for reading, hope you aren’t super bored every time I go Van Gogh over here). So, you go to a museum, and you see a painting. Maybe it’s a Vermeer. Maybe it’s a Velasquez. Maybe it’s a Renoir because you hate yourself. I don’t know! But you stand in front of a painting and you feel some way about it. Maybe you love it, because it’s Velasquez, and it’s amazing, and it dazzles your soul, and you read this book a lot as a kid and seeing this painting is a dream come true. I’m obviously talking about this one: 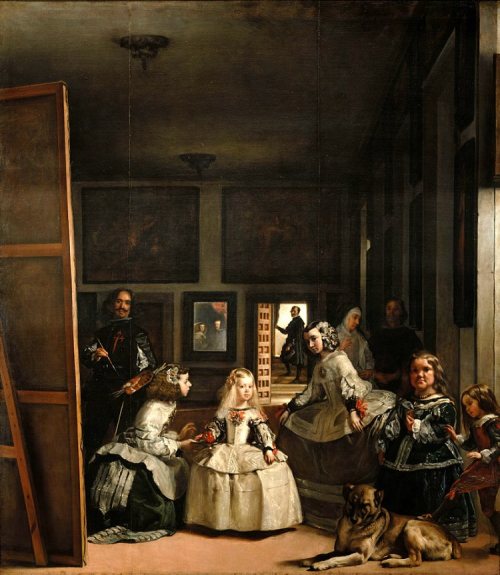 Anyway, this painting, it works for you. You love it. And then your friend comes up because they are bored and you’re taking too long and it’s Madrid and they want to party, and they are like, huh, lame painting man. Now, you could slaughter this friend, obviously, and that would probably be legal because, COME ON, seriously? But you are a kind and gracious person and you don’t, you simply accept that people are into different things. You love this, and your lame friend who you need to friend break up with is more into this nonsense:

I’m not the only person who feels this way about Renoir, by the way, and if you want to meet more like-minded freedom fighters, you can find out about them here. Anyway, in the end, you like what you like, which is the point here, and sometimes after you’ve spent hours explaining why Las Meninas is amazing or why Renoir isn’t, you still wont have changed your friend’s mind, because there is something at the center of interest or attraction that is undefinable, untranslatable, personal.

So that’s probably why when I went fabric shopping with my friend Liz in Delhi we looked at the same fabric and I thought, I want to go to there, and she thought, mattress ticking.

Khadi is one of my favorite Indian fabrics. In its essence, its a rough woven cotton cloth, but Gandhi’s embracing of the cloth as a symbol of Indian self-rule and self sustainability as part of the Independence movement glorified the humble cotton and brought it into the national arena as a symbol of patriotism. Now khadi is all over India, and the lightweight loose weave is a godsend on hot days, of which India has many. The thing I love about it is the way the texture of the cloth is varied and interesting, so that as you sew with it its variety and many inconsistencies or flaws reveal themselves to you. It’s a rather stiff cloth, but it softens with wear, and it’s often woven in threads of two colors, giving the cloth a “change in the light” quality. I bet some language, Japanese maybe, has a word for that. While khadi might not be the best known fabric abroad, as it’s a personal favorite I wanted Liz to check it out when she was here, and we both went home to Mumbai with more than one piece. Now, Liz might have thought I picked up something more appropriate for a mattress than a dress, but I know regardless she will support my sewing choice, as she’s cool that way. That being said, while I love love love the result, I have to say, it might have gone right past mattress and into Edwardian Prison guard territory… 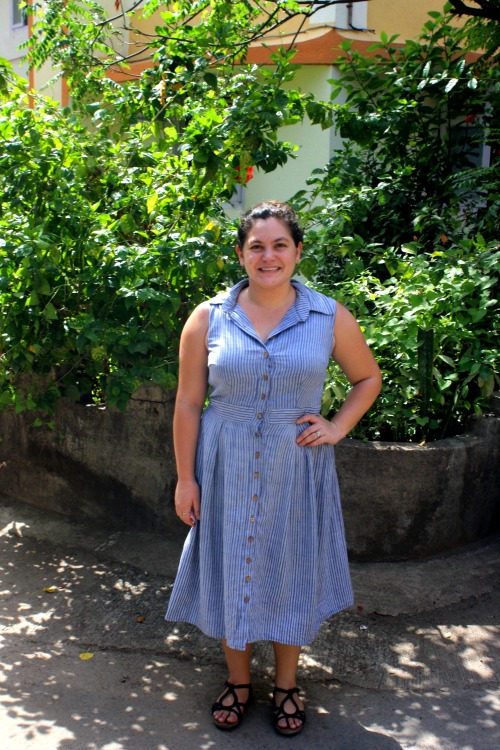 Ah, well, you know how it is, some days you start out making a charming shirt dress and end up in incarcerated in 1910. 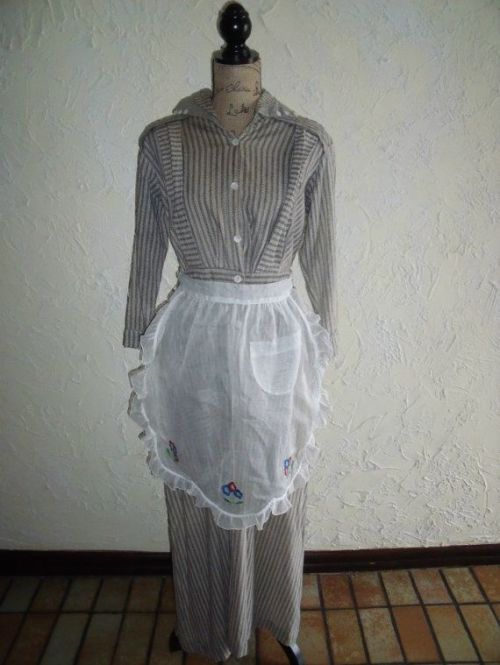 Maybe I’m not even a guard. Maybe I’m an inmate….

I guess a show about this wouldn’t be Orange is the New Black so much as it would be something like Tetanus is the New Scurvy. 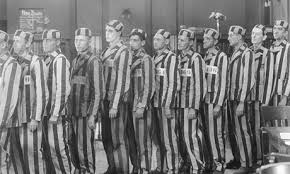 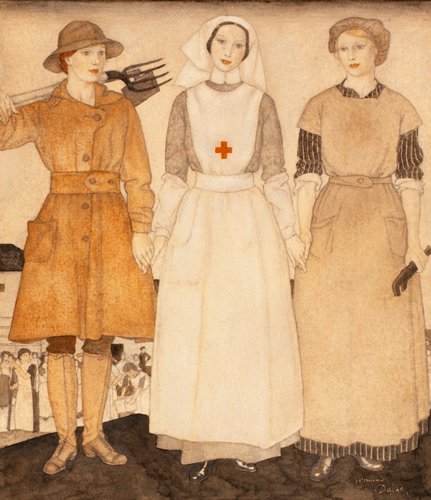 See the resemblance? Ah, well. It shows I’m tough, with a degree from the school of hard knocks. I bet that’s going to earn me a lot of street cred here in Mumbai. Or cause colonial flashbacks…. 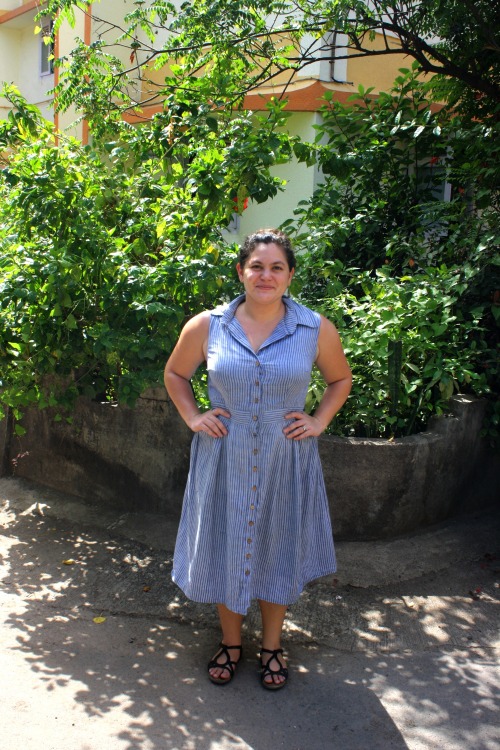 WHATEVER. I love my dress! Mattress, guard, inmate, see, it’s versatile! This is a version of McCalls M6696, which I have made several times before, here and here and one unblogged version. I love this pattern, but I’ve always had a little bit of chest gape between the buttons which I’ve fixed with safety pins. This time, I just cut the bodice with about 2.5 extra inches of ease, which fixed the issue and gave the bodice a looser fit, which is just fine with me, in Mumbai’s pre-monsoon heat (during which these photos were taken, now the monsoon has come in earnest and as I type this sheets of water pour down) I wanted everything looser and baggier and just not touching my body as much as possible. 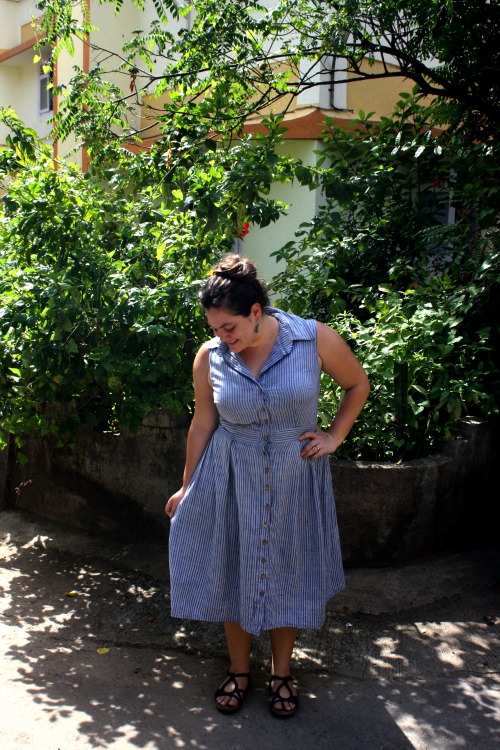 I made this version sleeveless, and I opted to drape my own skirt, aka throw some pleats in that fabric and call it a day. Otherwise I didn’t make any changes other than loosening up the bodice for gaping purposes. I played around with directions of the stripes a little on the waistband and then on the yoke: 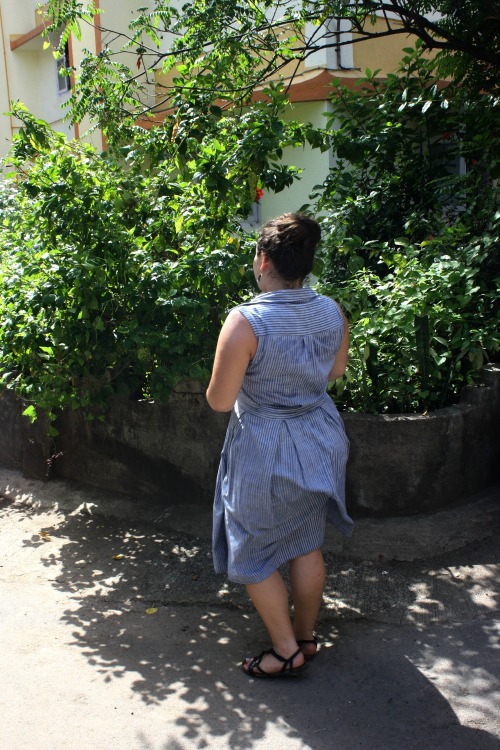 Oh, and I changed the gather to a pleat and took a little bit, maybe 1.5 inches, out of the back in a slight wedge shape to account for the change. That way I get that blousey 1940’s feeling without feeling like I could fit my cat in my back bodice. Side note, I had been walking around for all of ten minutes when we took these photos and you can ALREADY see perspiration on my back. THAT IS WHAT IT IS LIKE HERE ALL THE TIME. 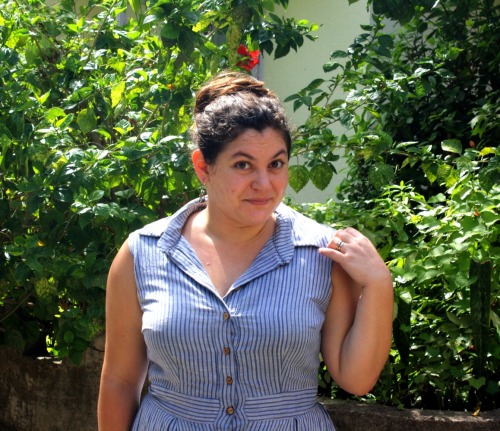 I finished the armholes with bias tape, as one does. I also french seamed it throughout whenever there was a seam that needed such a thing. 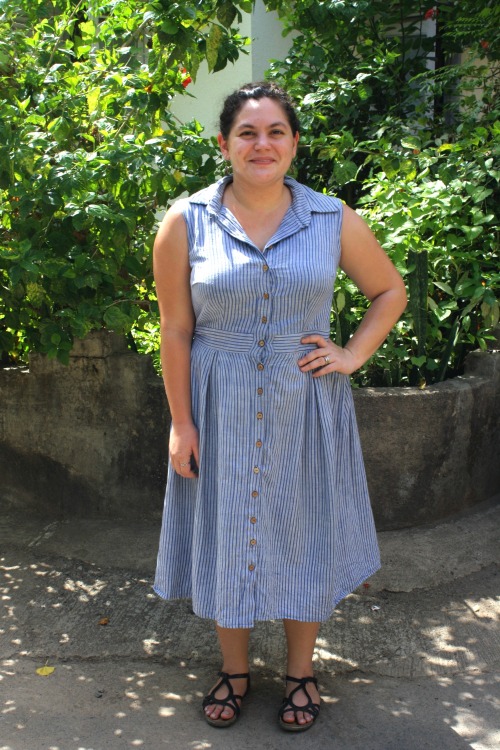 I’ve taken to hemming things a few inches below the knee, which might not be the most flattering length for me ever, but it is pretty useful in Mumbai and India in general. It’s funny, for a Saturday night at a bar or restaurant I will see, and wear, things much shorter than this, but during the day walking around seeing someone in a dress or skirt is rare in and of itself, and when in doubt, tea-length does work well even if it shortens me. Sigh. Like I need something to shorten me…. 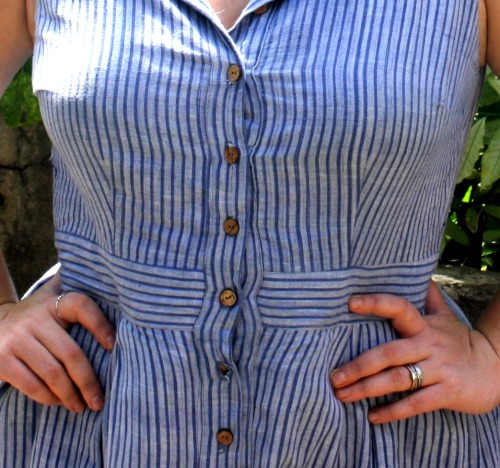 A little close up so you can see the cool wooden buttons, purchased at my local market here in Santacruz (our neighborhood), and the fabric. Ha, one of the buttons is slipping out, I just realized that! Oy. I always like the way darts look in stripes, is that weird? 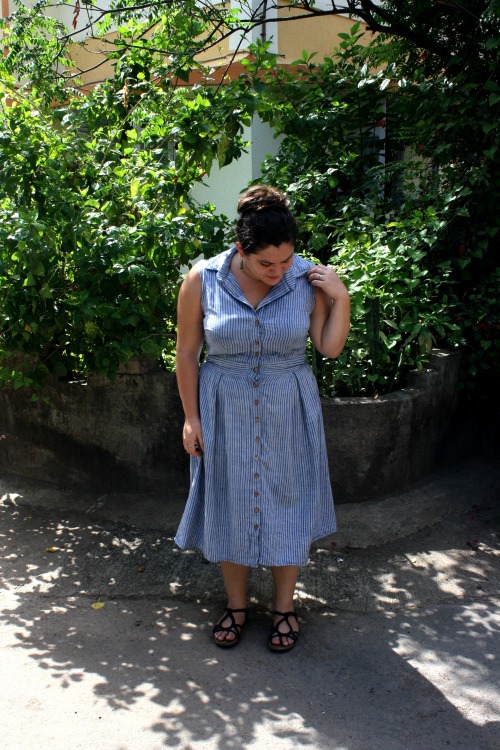 So there you go. Maybe it’s a little Edwardian Prison, guard or inmate, but I’ll take it. Besides, most people wont get the reference here, anyway, so I think I’m pretty safe. Although, a lot of people DO like Downton Abbey here, so….well, let’s hope they think guard and not inmate!

Coming soon, dressing for the monsoon! I…don’t know how to do it…