The Summer of the Shirtdress Dress

My name is Leah, and I believe I might be a shirtdress addict.

I know. I know. This is really difficult to admit, and I really appreciate your support and your encouragement at this time.

Of course, knowing the sewing community as I do, I know you are more likely to praise this addiction than try and help me heal it. And that’s okay, because frankly, I don’t want a shirtdress-centric rehab with shift dresses appreciation courses, anti-button conversations and healing collar deprivation based work outs. As addictions go, while this one might take up more room than my serious coffee problem, I think all things considered it’s pretty manageable.

Now, you probably having picked up on this addition because I only have three shirt dresses featured on this blog.But in the past month I have made THREE count em THREE additional shirt dresses, and in a recent trip to Kolkata I picked up a stunning khadi fabric to make another one, so I’m sort of on a roll here with this. The dress I’m featuring today is actually my second version of McCalls 7351, although by no means my last, and I’ve got a full shirted version which was make #1, and a modified Grainline Archer which I’ve lengthened into a dress, all of which I still need to photograph and post about. But instead I…just keep making shirt-dresses.

I don’t know what it is about them that makes them so addictive. It can’t be the construction, which is frankly a little onerous, with the collar and collar stand and all the many button holes and buttons. It can’t be the scant yardage, because these things can be fabric monsters, especially if you make the full-skirted variety. So it’s gotta be the look, because a shirtdress is dope. It just is. They look clean and pulled together but also fun and summery and classic, probably because they ARE classic, they evolved as a wartime staple, a woman’s riff on utility dresses during the Depression and the Second World War, and then they were elevated by Dior’s new look to the cinched waist full-skirted notched collar beauties of the 1950’s. Now you see them in all versions, slim fit, shift style, maxi, it’s an epidemic. Sooner or later a film called “Shirtdress Madness”  will no doubt be releasing to scare the youth of America into walking the straight and narrow line of a pair of jeans, but for me? I’ll stay an addict, at least this summer. I’ll tell YOU when I’ve had enough…

My friend Liz, who accompanied me on our fabric tour of the North, and I don’t always have the same taste in fabric. But standing in a Rajasthani state emporium in Delhi, we had that rare moment of simultaneous want for a pretty block printed cotton. This could have ended our friendship right there, but luckily there was enough that we could both score two and a half meters. Crisis AVERTED. And we both ended up making shirtdresses, which, just goes to show we are friends for a reason. Of course, Liz’s is much cooler than mine, but still, I will make do. So without further explanation, the evidence of my continued shirtdress problem:

Okay! So this is the slimer-skirted version of this pattern, although I would love love love to try the circle skirt (maybe it’s a half or a 3/4, not sure) option from the pattern, I have yet to have quite enough fabric to do so.

I do like this skirt option, which I lengthened a little because that’s always a little better for India, I feel. But I have to say, I think the pockets make the hips look bulky and weird. Thoughts? 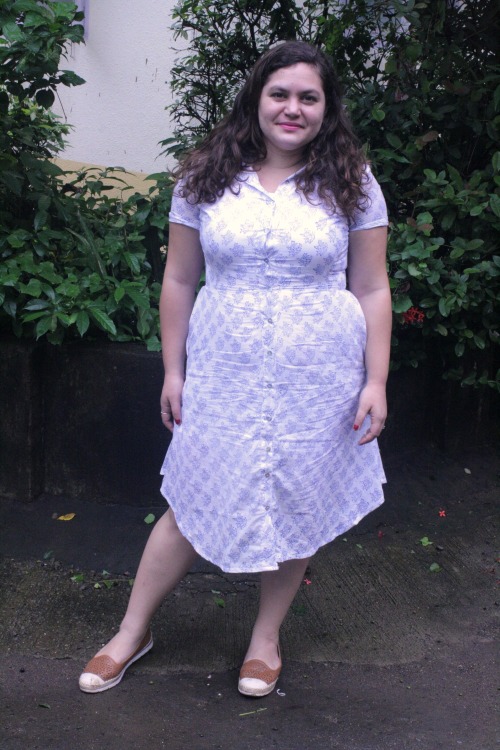 I’m wearing a self-drafted slip under this because the fabric is a little translucent, by the by. See, you can see the pockets sort of popping at the hips. Hmmm.

I tried something different with the sleeves which didn’t really work, honestly. I wanted a visible cuff, but the sleeves, despite an attempted alteration, are still too tight. I blame kickboxing which while getting me in great shape has sort of bulked up my arms. Any thoughts on how to make these sleeves bigger?

The hem is still curved, which I like, although it probably looks better at the original hem length. Ah, well. Still a nice detail.

I cut a straight size 16 with a cup size D, but I found in my last round that the pattern was a bit large in the waist. So for this version I took about 4 inches out of the waist in front darts, and I’m pretty happy with that. Otherwise I think the fit works, except, as mentioned, the arms. 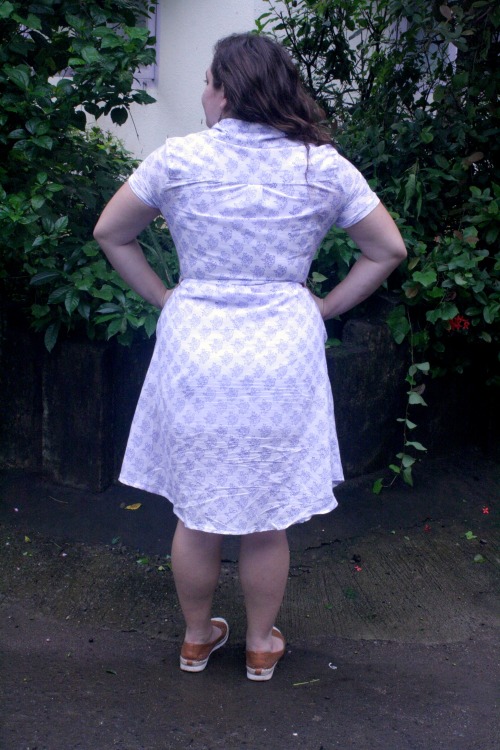 See, you can see some pulling across the upper back which all roots to the tightness of the sleeves, I believe.

Still, sleeve woes aside, its super cute, which is, of course, why the shirtdress is so addictive. They just look good. They look pulled together, something I never ever feel, and they scream “daytime elegance”, which I love. 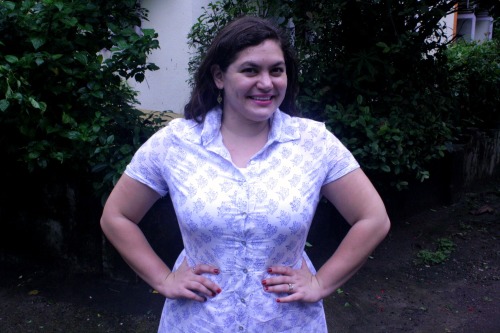 I think you can see the print a little bit better in this photo. It’s a blue on white, and it’s awfully lovely, I must say. You should see Liz’s version, it’s tops!

The big difference between this one and the ever popular M6696 is the waistband, the shirt options (which, real talk, you could self draft) and the fit of the back. But I’m glad I have both now in my collection! I scored this on a pattern sale and what’s-his-face brought it back from the US after his last visit. I think my next pattern int his addiction might be a vintage style. Let’s see how it goes. I’m not getting off this train any time soon. And frankly, I say SUMMER of the shirtdress but it’s basically summer all the time here, so…. 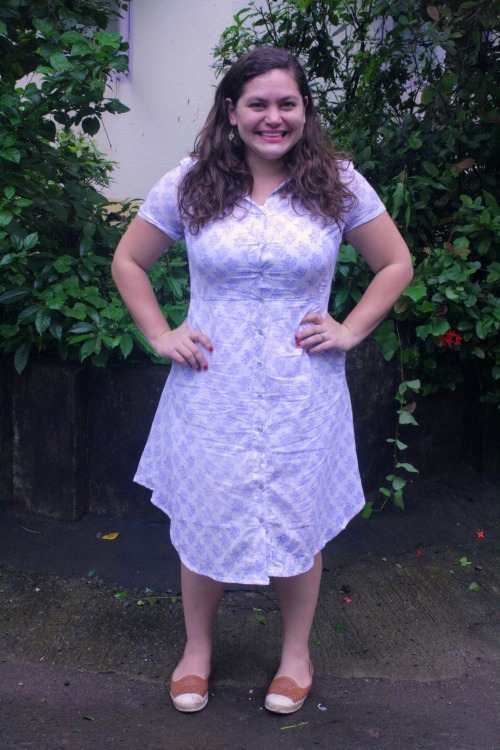 What are you addicted to, clothing/sewing-wise? Do you see your construction as destructive or productive?