Spoiler alert: There is nothing French about this dress. Except that it is awesome. And France is, by and large, but for the not-so-latent racism, pretty awesome! I mean, on the one hand, a longstanding intolerance for all non-French people, on the other hand, WINE. So, that’s a toughie, am I right? But despite it all, I have to tell you, I like those cheese eating surrender monkeys, I do, I can’t help it, with their Gallic shrugs and their delicious bread and their belief that lung cancer is something that happens to other people. And so when my mother asked what our theme should be for our summer BBQ, and we discovered the best date was on the 14th of July, well, the choice was clear, Bastille Day, of course! Viva la resistance!

Now would be the time for a Les Miserables reference if that wasn’t THE WORST THING EVER MADE AND REPRESENTS AN AGE OF TERRIBLE PLOTLESS MIND-ROTTINGLY SENTIMENTAL POWER BALLAD DRIVEN POP MUSICALS THAT HAUNT THE WORLD TO THIS DAY.

Ahem. Excuse me. Sometimes my rage about Les Miserables interferes with my life and my eyes get all black like I’ve been possessed by a demon, and I just hold the shift key down and let the world burn….okay, that’s it, move along, folks, nothing to see here.

So, where was I, Bastille Day BBQ! So given that I was going to be in Philadelphia anyway to watch a good friend change her name, my mother and I agreed that I might as well stick around to help cook and enjoy the anniversary of the storming of the Bastille together. I was like, a chance to cook a gigantic meal in a non-New York kitchen? Uh, yeah, I’m all in. And so we prepared a plethora of french-themed goodies and had a delightful time, or should I say, it was magnifique! Tre jolie! I would think of a third thing but I….don’t know any other words in French. It was fun, is the point, and I wore a new dress, because that’s how I roll. And it looks a little something like this! 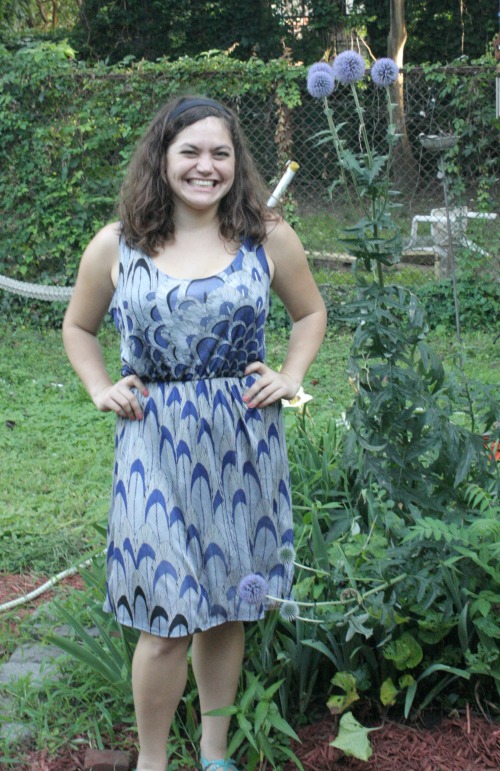 Full disclosure, I’m aware that is a particularly blinding smile from someone who smiles deeply in general, but there had been wine, because, FRANCE, and also, it was a day ending in y…

Also there were mojitos. A very traditional french beverage…

This dress is, as you can see, awfully simple, which is part of why I love it. It’s McCalls 6744, a knit dress that can be both a tank or a wrap bodice. I clearly choose the tank option, but it was so easy to put together that I’m now eager to try the wrap as well. (P.S: The model on the pattern package is Angelina Jolie-ing SO hard with the leg thing, why is that still a thing? Discuss).

I like this pattern quite a bit, as no-frills as it is, because it really lets you highlight the fabric you use. This particular fabric was a gift from my supervisor Sam at the costume shop, and I will forever be grateful to her because, um, HAVE YOU SEEN THIS FABRIC?

Don’t you love it? Even if you don’t love it, I don’t care, I love it. The print had a repeat so I thought a lot about how to cut it, but in the end I decided to place the repeat on the bodice and let the skirt but a little plainer (as if anything about these silver and blue feathers is plain…). The material is some kind of slinky slippery synthetic, rayon, maybe? I’m not actually sure, but it feels amazing on the skin and is pretty good in the heat. I wore this out to karaoke a week or so ago and I am, shall we say, an enthusiastic participant, and also in my mind I secretly believe it’s also dance-eoke, and the dress survived and kept me pretty cool, even during a rousing round of “Please Don’t Stop The Music” (not my choice, but I was happy to do back up vocals…)

It’s close to a racerback in the back, but not quite, which is good, because I hate constantly feeling like my bra is showing. Some people just seem so cool about that, but not me, oh no, I’ve never been cool a day in my life an I’m sure not starting now…

The bodice is designed to be a bit baggy, and I think it works because of the elastic stitched into the waist. The pattern has you just flip and stitch down the neck and armhole edges to finish them, which I did, but I don’t know how I feel about it, aesthetically. I mean, I guess it’s fine, it just feels a little lazy. Thoughts?

In my parents garden the thistles are in bloom, so I insisted my friend Ben (hi, Ben!) who is not only one of my oldest friends, but currently working for my parents, take my photo near them. I love thistles. In another life, I was totally Eeyore.

So pretty. See, at my parent’s house, everyone eats well, even the bees.

I know I did! So there we are, my Bastille Day Dress, which I will be wearing on many non-Bastille Days, because shut up France you don’t own me! I’m an ADULT!

In other news, I realize that I’ve made, like, 5 dresses in a row. I gotta make something else, people. This is getting silly.

Real talk? I probably wont, though…