The Touch Of The Irish Sweater

It’s the strangest thing, but when I told people I was going to Ireland many of them asked if I was visiting family. It’s not that it would be weird for me to visit family, though I don’t have any in Ireland whatsoever, I don’t know what the Russian Jewish or Puerto Rican populations of Ireland are but I can’t imagine they are bounteous. Perhaps I’m being dreadfully unfair here, and if so I’m awfully sorry, and there is an Irish Jewish Museum here, as a quick google search reveled to my mother and I, but the point is, no, I have no family in Ireland. But it’s not the implication that I would or wouldn’t have family here that surprised me, it’s that people asked. On few other trips I’ve been on has anyone asked me if I was visiting family, which makes me think that’s a thing, many Irish people must come back here to see family or their home town or where their ancestors ate potatoes stuffed inside potatoes on top of potatoes. I’m kidding, the food has been lovely, actually. But the point is, I just think that’s sort of funny that people seem to immediately ask that question about Ireland. Because my family is many things, but Irish isn’t one of them.

That being said, my mom used to get asked if she was Irish all the time. She had sort of auburn hair when she was younger, and she has pale skin and freckles, so I guess she looked the part, and besides, she looks amazing in many shades of green (She’s an autumn). So when I told her I would make her a sweater this year for a (very) belated Hanukkah present, I thought I could make something that would both fit the woman and this trip, as I had a suspicion I might be furiously knitting as we drove across hill and dale. And as it turns out, I know myself very well, because I ended up finishing this sweater literally as we drove about the Ring of Kerry on the 31st of December! So I got it in just under the wire for 2013, that’s something, at least. My mother was amazed, she was sure she would get it for NEXT Hanukkah. Oh ye Deborah of little faith…It’s not that my mom doesn’t think I’m a fast knitter, it’s just that she KNOWS sweaters take forever, and I think she felt guilty about me making her a gift that takes so much time and effort. But if she could gestate me for 9 months and then push me through her body and out into the world, I can make her a damn sweater or five, am I right?

At any rate, the sweater was one thing, convincing my mom to allow me to photograph it was another. So many battles, so little time. But I did it! I made a sweater AND I got my gorgeous mom to pose for me! Victory lap! So let’s see this 6 week long endevor, shall we?

The pattern is a free pattern (FREE PATTERN!) from Berocco, Avocet B, a really nice simple well designed open cardigan. I ended up changing the garter stitch to stockinette stitch, but making no other changes, except, well, I guess because I didn’t use the recommended yarn I just ended up with TWICE as much yarn as I needed by buying the number of skeins suggested. So that was…odd, and I’m not sure what to do with the 5 extra skeins of Berroco Vintage Yarn I now have in this color, Douglas Fir. It’s not a great one for me, sigh, so…

My mom is the cutest. We took these photos on a woodland walk through the grounds of Ashford Castle, a really lovely place.

She loves this cardigan, she was very happy to have it and even happier that I finished it in such (for me) record time. The sleeves ended up a bit long, but otherwise the fit is perfect for her, by her own admission. 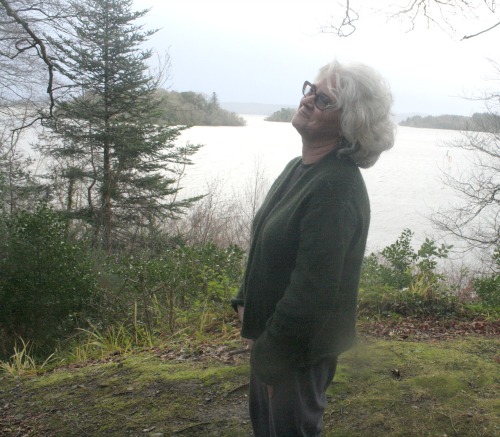 She grumbled a bit that I made her take off her coat in the middle of the woods, and what you can’t see from these photos is that my dad is nearby holding all our stuff. Thanks, Papi.

See? Awesome color for her.

I like this collar detail a lot. You knit these extensions in the side pieces and seam them together into a collar that kind of rolls away from the neck. Simple yet very pretty, I think. In general I found this pattern totally easy to follow and clear, and I’m pretty pleased that a free pattern was this well made and transparent. Why can’t sewing patterns be more like that? I’m looking at you, BurdaStyle!

A little close up of the yarn for you. It’s actually a bit darker than this, but here you can see the gold in the green. It was actually pretty nice to knit with, the acrylic/wool blend is really nice and soft.

As reluctant as she initially was, my mom really got into the posing by the end. She would be the best model. Call Gucci, he should know about this!

The woodland walk was just beautiful, want to see? 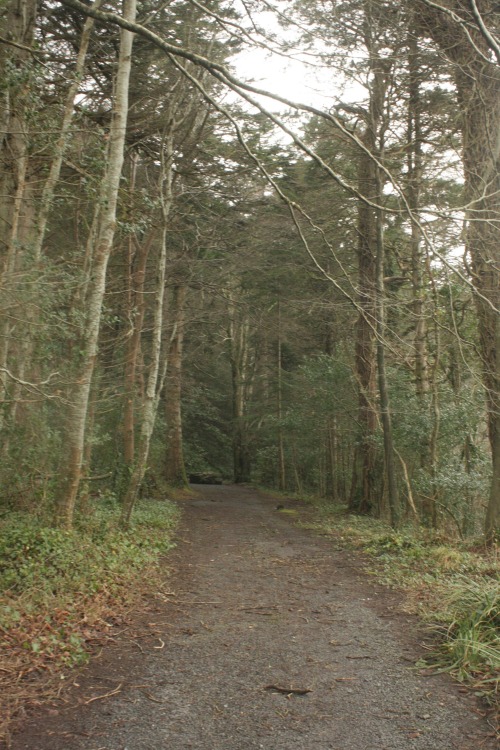 And I knew the whole time that my mom was nice and warm and cozy in her new sweater! She might not have a touch of the Irish in her blood, but at least now she has it in her wardrobe. Not too shabby, right?