The Book of Ruth Dress

The biblical story of Ruth…has nothing to do with this dress. I don’t know, guys, sometimes it’s hard to make a catchy title!

That said, the story of Ruth and Naomi is very interesting,  because it’s about these two women who are related to each other in a way that is often seen as contentious, that is, they are daughter and mother-in-law, and yet their closeness was a big part of their survival. This is actually sort of close to the theme of my new novel, more on that in the months to come, so I don’t mind naming this dress which I love so much after that story, even if it has nothing to do with it!

That said, when was the last time you met someone named Ruth? It’s a name that I feel has gone out of fashion, although that probably means it will be soon in fashion again and there will be four Ruths in every kindergarten class. Isn’t it funny how names come in waves? When I was growing up I knew, like, 10 Sarahs. I have met many a Priya my age here in Mumbai, so obviously that had its moment. The Bachelor franchise is a great indicator for this, actually, whatever names (and made up names, I’m looking at you, people named Wes and Ames and Kalon and whatever the hell) were popular like 30 to 23 (shudder) years ago make their way onto those hallowed halls of ugly crying and right reasons.

At any rate, Seamwork toils hard monthly to give us new patterns with new names, and in January, that meant we got the Ruth Dress and the Sky Jumpsuit, so one named by Upper West Side Jews and one named by West Village hippies, both in 1965. As you know, I made Sky recently. But did you know I made Ruth, as well?

Well, NOW you do! And my friend DP took the photos, working hard to find a good background, thank you, DP! And they were on his phone in google photos and the powerful and might google made a GIF! It actually made two, but I will save the next one for the end. I don’t know why it does that, but I kind of love it? Maybe? I don’t know! 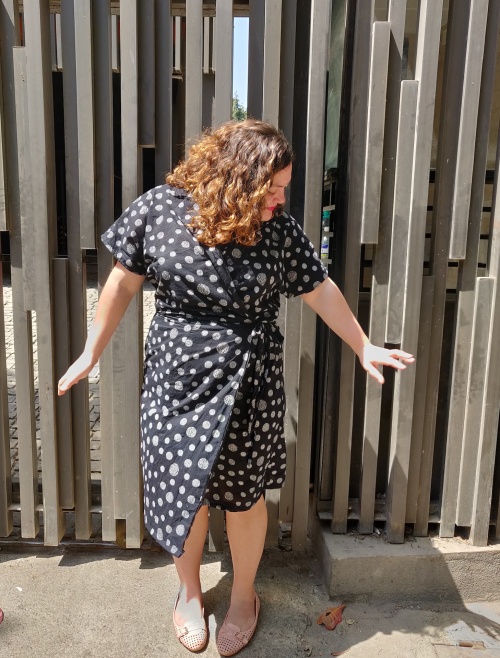 I really like this dress. I love the design, honestly. Sometimes I like Seamwork, sometimes I’m meh with Seamwork, and sometimes I straight up fall in love. This is one of those times. It combines many things I love and struggle to find the perfect version of. A woven wrap dress that doesn’t look like my breasts are going to explode out of it? A shirt-dress feel without buttons? A notched collar that doesn’t look like garbage? Check, check, and CHECK! 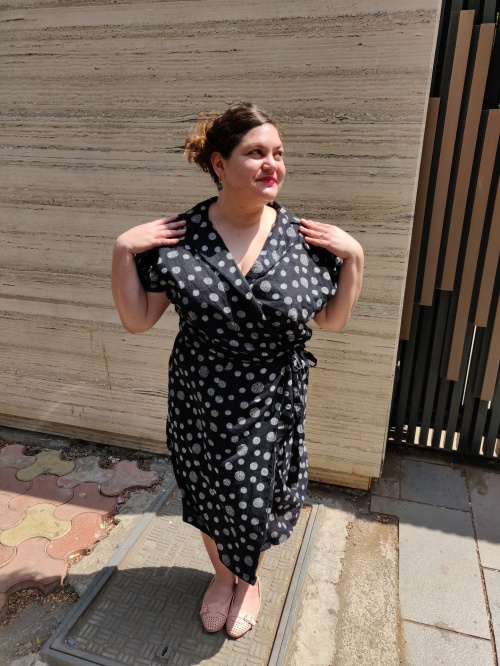 This was another print out that I realized had printed out of scale, so I cut out a twelve, but it is still a little big. I’ve just cut out another while slimming down the bodice and the waist. Who even knows what size that is? I sure don’t! Eh, whatever works.

The print is from Thakur, of course, obviously, always, and it’s sort of polka dots but it has a sort of floral or seed formation look, I don’t know, I like it! I feel like I wear a lot of bright colors these days, after all, pink is the navy blue of India, so it was kind of nice/odd to walk about in black and white. I did feel quite sophisticated, though! Something about this design just feels very put together (the dreaded phrase) to me, which I love, there is a polish but also a little bit of sexiness, what do you think?

The tie is subtle, which is nice, I don’t know, as I said, when Seamwork works, it really works for me! Which I guess is the point of constantly releasing new patterns, that you are going to appeal to different people every month and that diversifies your fan base.

It was quite windy when we took these photos! That said, it’s a good way to see that the two halves of the front skirt really do overlap completely, which is good, if you like that sort of thing, which I do!

Speaking of a wrap dress and boobs, I did add two snaps to the spot where the two sides of the dress cross to avoid wardrobe malfunctions aka showing the world which bra I’m wearing. Just a little insurance!

I am so into this dress, I can’t wait to make it all over again! What Seamwork patterns do you love? All? Some? None?

The Ants in my Pants Pants

I would not say I am one for crazy pants. We live these days in a crazy pants world, and I think that’s wonderful, but crazy printed pants have never drawn me into their brightly becoming arms (legs?), probably because I’m already a prints person with closet full of printed tops and despite what the runways and Pretty Little Liars seem to want me to believe, pattern mixing is not my thing. So I need SOMETHING to be plain, or at least, matchable, and that is usually the job of pants, to my mind. Not that I wear pants much, to be fair, but when I do I tend to want something basic. Pants are sort of like giving up for me, if I’m being honest. Pants are something I wear when I can’t figure out something cute, and I just throw up my hands and think well, I guess it’s PANTS today, way to let yourself DOWN, Leah, way to let the TEAM down. I don’t know what team this is supposed to be, but in my head those sad mornings it’s quite clear.

I know that this isn’t everyone’s philosophy. In fact, I think most people I know prefer pants to anything else. Especially jeans. I own two pairs of jeans. I rarely wear either. It’s a good thing I’m moving from the States because I believe this is grounds for treason here, not wearing jeans much. At the least, it’s deeply unpatriotic. Although since denim became popular in India it might even rival our own devotion, check out these sad 90’s monstrosities:

Or this more modern negative situation: 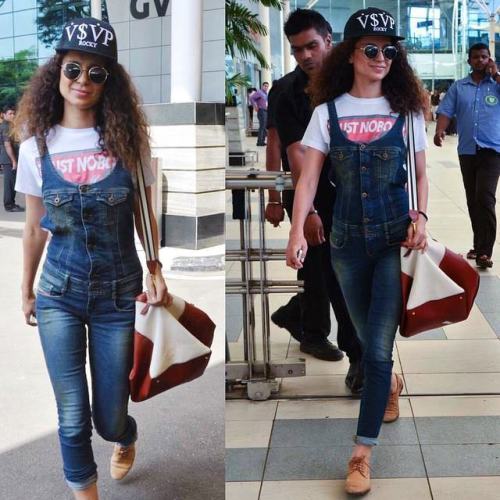 This actress’ name is Kangana Ranuat and she is very talented and she is better than this.

Yeah. So maybe I will be even stranger to the general public once I’m there, but I have to be what I am and live my life, and that’s a life with minimal pants. That all being said, I did recently make a pair of pants that I could not be more into, and not only are they not plain, they are insanely printed. And yet? I love them. I love them so much that they give me ants in my pants and I need to dance.

Yes! See? CAN’T STOP THE DANCING. Could barely stop to take these photos! These began as a love affair with fabric. I saw this fabric on  GirlCharlee.com (yes they have wovens now I don’t know what to do with myself).

See? Look at that face. That is the face of someone dancing on the inside.

The pattern is the Colette Patterns Clover. I gotta made a different pants pattern, guys. I’ve made this so many times. I need something new. I HAVE many other patterns. I should made some of them! I’m going to make these next. Maybe this is why I’m not as into pants? No. Probably not. ANYway. The Clover pattern ain’t broke so yeah….

This fabric is just, I can’t stop loving it. It reverses everything I’ve ever felt about printed pants, on myself, and on others.

The Clover is something I can kind of make in my sleep at this point, and I always make a size 6, and that’s what this is. I did, as I always do, flat felled seams on the inner thighs and crotch, and french seams on wide side-seam.

A little rear view for those on the internet who would like to see that. YOU’RE WELCOME, creepy guys googling 90’s Bollywood images! Take that! 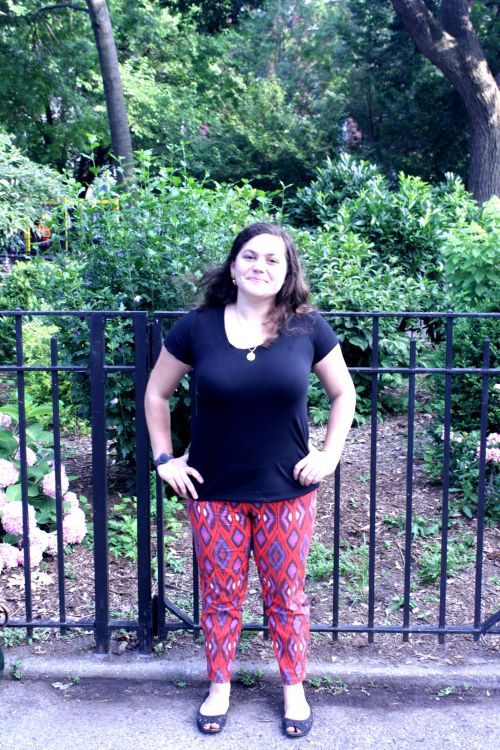 I also made the shirt! It’s a plantain. Boy, this outfit is like a double tried and true combo.

And because it’s a typical outfit, I have to do a typical jump shot! 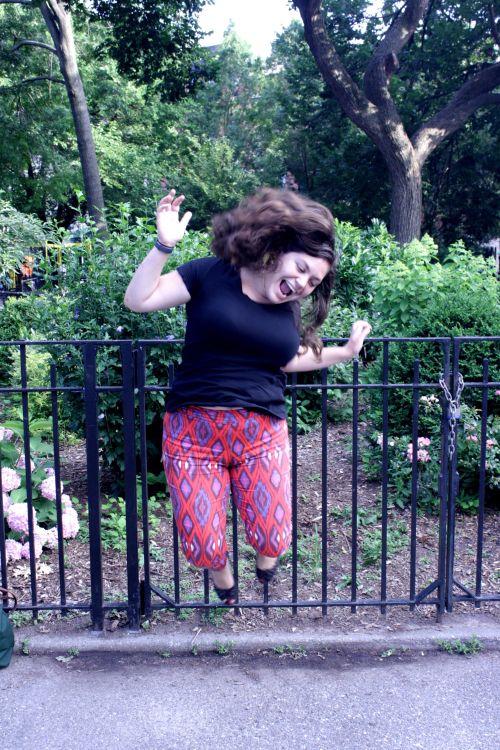 BOOM. Pants I love and don’t even feel bad when I’ve chosen to wear them. Pants that don’t make me feel like I’m giving up! Boom.

Do check out my Etsy Shop for new (old) vintage pattern listings! I gotta unload these before I move, people, I can’t take ever pattern I own to India, I think the Indian Government will suspect a new and entirely inefficient form of colonization.