You know what was not a flattering period of time in Women’s clothing? The 1920’s. There. I’ve said it. It’s out there. Deal with it. I’m sorry, but it wasn’t. I totally appreciate the innovations of the period, and really, in terms of women and the mobility they had physically it’s such a revolutionary time, but holy hell does the drop waist look bad on most people. Myself included, photos to follow.

So while I admire the spirit of the 20’s, the fast cars and fast women, the music and the decadence, I’ve always had a hard time with the clothing. Which isn’t great given the fact that this past weekend I went to the Jazz Age Lawn Party on Governor’s Island! It’s kind of this big 20’s themed party on the island, which is between Brooklyn and Manhattan, a ferry ride (free, by the way, which NOTHING is in New York) will get you there. The island is so lovely, it was used in the past as a militery base, and then closed to the public for a long time. It was re-opened in 2010 and now they are constructing a park and it is just lovely, I would recommend taking a picnic and a small child, if you have one handy or know where to steal one from, and taking a day trip, if you are around New York. (I’m kidding, please don’t steal children, it’s not great.) So they have been doing this 20’s style party there for 4 years, and this year it was bigger then ever.

And I have to tell you, despite the crowds and the lines, it is a pretty cool event, but if you want to enter into the spirit of the thing, you gotta dress the part. Well, at least, I felt obligated. My parents, who occompanied me, felt no such compulsion. But I didn’t just outfit myself, I also made a dress for my roommate Emily!

And that’s the main event of this post, because my friend I threw together literally the morning of the event and it’s whatever. But EMILY’s dress is pretty lovely, if I do say so myself:

I wanted to make her something she might actually wear again, so that meant deviating from complete period appropriateness by giving her a 2013-approved hemline. But it’s a bias cut dress, which totally works, and I figured though it might be heralding the 30’s a little bit, it’s still hinting at the 20’s with it’s fluttery sleeves (self drafted, I will have you know).

In case you couldn’t tell, Emily really likes this dress. For the sleeves I just cut half circles and stitched them on where the straps go in the original pattern, and then adjusted them to be a bit tighter on Emily’s lady-like shoulders. Emily felt very bad about needing an adjustment and I just laughed, like, this is the whole point of making clothing, that you can adjust to someone’s body! Muggles, man, I tell you…

Does this remind you a bit of a slip? HOW ODD. No, it’s not, the pattern is Colette Patterns Cinnamon, a slip I had long lusted after (heh) and finally bought to download. I made myself one in white, which I haven’t blogged about because somehow that seems more intimate then photos of me in a swimsuit. I’m weird.

I cut a size 8, which I think hangs nicely off of Emily (that bias cut, man, it’s a bitch but it’s so worth it…) though I would take a wedge of out the back if I made this for her again. On me it actually works pretty well, that’s the swayback curse for you, i.e. I have one. You totally cannot see where I melted some of this highly synthetic crepe with an iron and then stitched it up. Thank goodness. 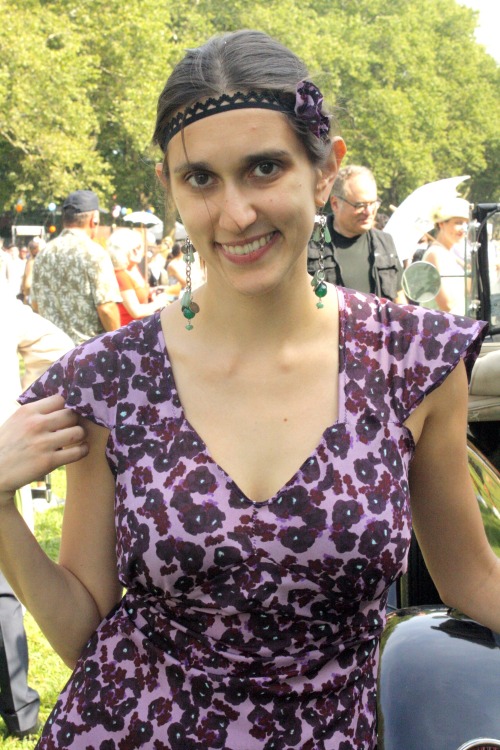 I’m pretty in love with this material. It’s not at all period appropriate but it looks great on Emily and it’s preeeeeeeetty! 4 dollars a yard on Fabric.com. NAILED IT. 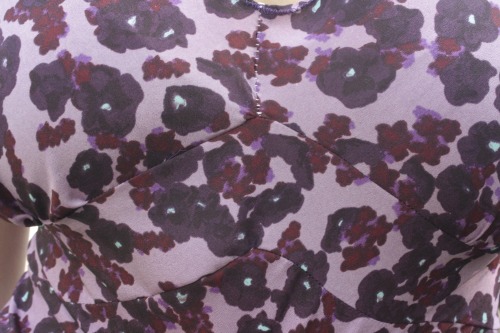 I love the bodice detail on this pattern. So flattering, no? Because I cut this on the bias, I hung up the pieces over night after I cut it, and then stitched up the majority of the dress, and let it hang for four days while I gallivanted off to Cape Cod to hang out with my friend Lee (hi, Lee!) and do some writing. So when I got back the skirt was all ready to be hemmed! Life works well, sometimes. And the rest of the time it’s the WORST. 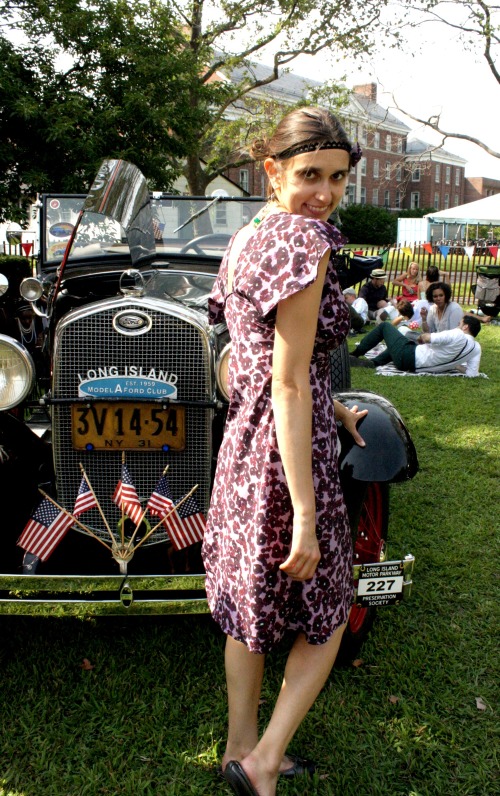 But not on Saturday! Saturday it was great. And how good does Emily look posing with these amazing vintage cars? So much vintage at the party, so little time:

How much do you love these shoes? I wanted to steal them off this girl’s feet but they don’t let you do that. THANKS A LOT, PURITANS.

Why don’t men dress like this anymore? I know it gets warm but DAMN is it attractive.

Okay, okay, I will show you what I made for myself but it’s really no big deal. 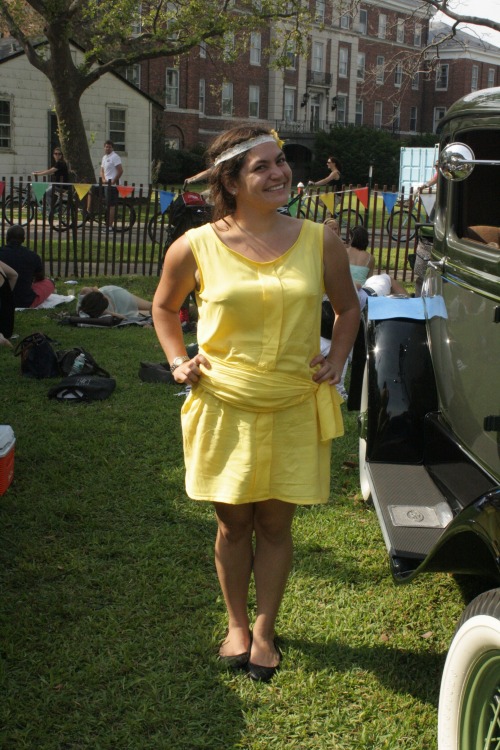 Meh. This is very much whatever. It’s a sack. So it works great for the 20’s, no? I’m so mean. BUT SERIOUSLY. It’s actually Colette Patterns Sorbetto ( I swear I did not plan to make this so Colettey but can you blame me, seriously amazing patterns from those beautiful geniuses) lengthened to dress length. It was a lot longer, I just used all the rayon I had left over from this skirt, and then I chopped off a bit at the knees and used that for the sash. 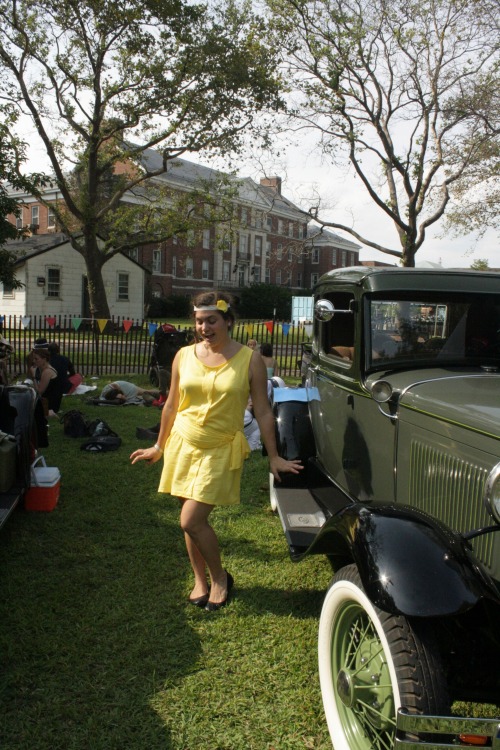 I seriously made this in an hour. It took me about one episode of Rookie Blue. Emily was so appalled that I had used all my time making her something and hadn’t made something for myself so I got up on Saturday morning, composted, ran, and made a dress. LIKE A BOSS.

Look how I laugh and laugh! The 20’s were so wild. Look, eh,this dress, it’s fine, I suppose. It worked for the event, and I can always belt it and wear it again, which is important, I hate the idea of making something I would never wear again, although I have TOTALLY done this. Oh, and I made the headband too, duh. And I made Emily’s. Like I do.

But the point is, we had a great time!

Also, let’s talk about the view from the ferry, shall we? It’s worth the trip for that and that alone:

The Jazz Age Lawn Party is a pretty good time, I would recommend it if you are around next summer. And I just hope the decade works better for you then it does for me…why isn’t there a 1950’s lawn party? COME on!