“Don’t go to the well, Peter, there’s no more water there”

People, sometimes being a planner can be a problem. I’m all about the plan, the inspiration board, the concept. I thought I had this Mad Men Challenge in the bag people. IN THE BAG. The best laid plans of mice and men. Am I right? AM I RIGHT?

Let me start by saying, I am a huge fan of the TV show. Just a really huge fan. I know there are people out there who are into it for the vintage style and the pretty ladies, and that’s all well and good. And I know there are people who don’t even like the show itself, and while I literally can’t understand that, I totally respect your right to not invest in the story. Hey, man, I couldn’t get past chapter 1 of The Hunger Games (but I swear I’m going to try again! It’s such a  disturbing concept…) and I don’t even watch The Wire! So I’m guilty of some stuff. When it comes to Mad Men, however, I am a fanatic. So if you don’t get some of the references and direct quotes coming up, just ignore them, that’s totally fine by me. But know this. They will be coming at you fast and furious. Get excited.

Let me first say that I knew from the very begining that I didn’t want to emulate Joan. Don’t get me wrong, I love Joan. I love Christina Hendricks! I loved her on Life! Remember Life? Great show. Sorry it was canceled. Damien Lewis, please feel free to CALL ME. But I didn’t want to go for Joan. SO mainstream. How can I express my true and complete fandom by dressing like the one character everyone knows? So I thought at first I was going to replicate something of Trudy Campbell’s. Not only does she have the same last name of one of the best people I know (talking to you, Lisa!), but I just adore her. Yes, she has gotten repeatedly screwed (on many levels, HEYo!) by Pete, and yes, she wears some insane hats. But I love her. Girlfriend is a treat. “This is America, you don’t just SHOOT the President!” Fact. Love her. But then I realized that because Trudy is so fashion-forward (read, trend obsessed) she rocks a lot of ensembles that don’t suit my personal taste. Okay, I thought, I have a near-encycolpedic knowledge of this show, let’s do this. I did love me some Helen Bishop! All progressive and pro-Kennedy despite her son Creepy Glen and her scandalous divorce. But she’s clearly an Autumn. And I’m a winter. That’s no good. Megan and I have simular coloring! But she’s a stick. And also more into the late 60’s aesthetic which frankly is abhorrent to me on so many levels. (Mod and I do NOT get along.) Allison is pretty! But she dressed pretty terribly, let’s admit that, shall we? Plus, she slept with Don and then freaked out and took it out on Peggy (and I’m very protective of Peggy) so I don’t want her life. Kitty is cute! But rather garish, though I do love her! And I don’t want to end up married to a gay man. Dr. Faye is super cute! But she’s a blond. That’s not happening.  And I’m not really into the boho thing going down with Madge (though I love me some Rosemary DeWitt). As a Jew and the decendent of department store owners, the Rachel Mempkin thing seemed a TOUCH on the nose, plus her best thing were her suits, which I don’t feel up to right this minute, or this amazing nightgown:

Super practical. Where WOULDN’T I wear that? I loved this golden dress Bobbie Barrett wore, but I really have been trying to shop my stash and there is a curious lack of gold up in there:

Besides, who wants to emulate Bobbie? Girl had issues. “The full Don Draper treatment”? Gross. I’m not going to discuss Betty and Peggy, because my mom already thinks I dress like a little girl, so those full skirts and florals aren’t going to do me any favors, and besides, I already have a ton of ’em.

So there I was. Sigh. I didn’t want to go there, I really didn’t, but in the end, I ended up with Joan. Still, if you have to end up with anyone as your inspiration, oughtn’t it to be the most gorgeous woman on television? 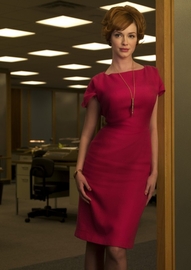 With curves for days and some of the best most silkily delivered insults anyone has every heard? “The last thing I would have thought Paul was was open minded”. GOOD lord. “I’m not a solution to your problem. I’m just another problem.” JOAN. Be my friend, please. Thanks.

So I decided to try and emulate one of her outfits. No big deal, right? Of course not, easy peasy lemon squeezy. I wanted to use Simplicity 4558, which I had bought on Etsy. HOWEVER. When I took said pattern out to make a muslin, I had the shocking realization that this pattern is skirtless. I mean, I’m sure there was a skirt originally included but somehow I had bought the pattern without a skirt. No wonder it was so cheap….

Okay, I thought, I can use a skirt from so other source, no problem. Then I make the bodice muslin. And I just thought, no. This is not good. I do not like this. A. it needs a FBA (god, that’s just going to be my life, isn’t it? How did I get away with not doing them for TWO YEARS?) and B. I just didn’t love it! So what was I to do? Then, like manna from the heavens, I thought, the Pastille dress! I like the pattern, I’ve already adjusted it to fit my frame, I know how to make it, let’s do it! I ditched the pale pink and pulled out a hot magenta viscose I had bought at Mood Fabric all those months ago. It has a great drape and a nice hand (look at me, using fabric words!) and I thought it would be perfect in replicating that amazing magenta dress Joan wears. Of course, it’s a promo dress, I don’t think it ever made it onto the actual show, but you know what? I don’t even care. I DON’T EVEN CARE.

So anyway, I’m almost done the bodice and then it’s skirt darts, attach skirt, install zipper and hem. I’ve made a few adjustments to the original pattern that I will outline later in more detail, but I’m just so thrilled to have something that I’m happy with and happy to be making and, hopefully, pays homage to one of my favorite things on television. And I watch a LOT of TV, folks, so that’s a stiff competition right there.

So, what’s going on with you? Are you a Mad Men fan, or do you just not get the hype? Did my Hunger Games confession concern you? I promise, I’m going to try again!