The Red-y For Thirty Dress

I don’t know that I had any special feelings about thirty. I mean, it’s a liminal point in many lives, I suppose, and I certainly viewed its approach with a certain amount of bemused trepidation, trying to figure out if I feared thirty, or just felt like I was supposed to. And had I done enough in my first thirty years on earth? I asked what’s-his-face but he said that I hadn’t done as much as the guys who created Snapchat so probably not. Thanks, guy. Super glad we got married three times. #couplegoals

So I had to, gasp, evaluate my own existence on my own, without aid. Ugh. So I thought about the things I have done, and the things I haven’t done, and all the ways I would like to make the world better, and all the things I’m lucky to have had and experienced, and then the list became too long and my head was spinning and I decided that perhaps, just perhaps, thirty years is just that, all that, and only that. Yes, I did not make snapchat. In fact, I do not actually know how snapchat works even though my friend Ben explained it to me in the Brooklyn Museum one time. #millennials

Here are six other things I didn’t do by my 30th birthday:

Here are six things, however, that I HAVE done already in my life:

And here are some things I want to do:

And here is a dress I made:

I used my trusty bodice block and obviously modified it for this very-unIndia friendly dress. 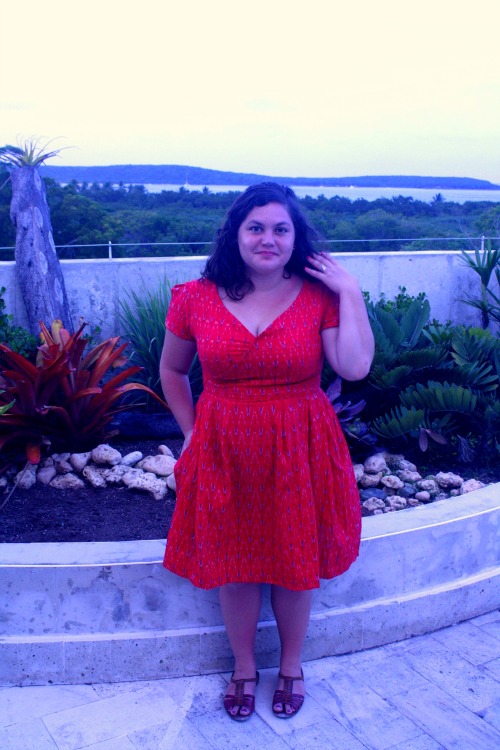 I mean, the fabric COMES from India, but the cleavage is basically A Fistful of Dollars it’s so Western. GET IT?

I took the sleeves from the Grainline Scout Tee and draped the skirt myself. The fabric is a subtle ikat from Thakur, and I have already made my feelings clear about Ikat sooooo….

And yes, pockets, obviously, you know the drill. I made what’s his face take these photos in this very cool hotel we stayed in recently in Vieques, Puerto Rico.

I finished the neckline with bias tape and french seamed the other seams. LIKE YOU DO.

So maybe I’m okay at thirty. Maybe I am whatever I could have been. Despite the lack of snapchats to sell.