The By The Sea Outfit

My father always says he bought our house in San Juan for the view. From the roof of our house, a green roof, just so you know, because my mom is amazing and she insisted, you can see San Juan Harbor, and you can sit and watch the giant cruise ships, floating cities of Disney tours and sunburnt tourists, slip in and out of the bay. At least, he can see that, and tall people can see that, but I am 5’2″ and I kind of have to peak over the wall if I want to see anything. Still, I love having a house by the sea. I love the ocean, I love the water, I always want to near it.

Well, can you blame me? Especially when it looks like this?

Of course, wouldn’t you know it, I went to San Juan with someone who could care less about the ocean, so I spent some time on the beach alone, reading and floating and watching the October currents sweep in and out. The waters are really rough in Puerto Rico this time of year, it’s hurricane season, of course, and it rained every day I was there, but I am sort of an idiot about the water and I stayed in it anyway, letting it push and pull me around.

And if I can’t be in the ocean, I at least want to be around it. And of course, I’ve got to dress the part, now, don’t I?

Of course, this is trying to be around in the 1940’s, I suppose. The top is a renfrew, to which I added a tie. I really just elongated the neckline binding and stitched it on, leaving the ends loose to be able to tie a bow. Spiffy, no?

The shorts are a pattern from the 1940’s, Simplicity 2017. I’ve made these once before, in a tan linen, which I took to Israel. These I did in a linen cotton blend, which I like a bit better, it’s lighter weight, which is whatever, but it wrinkles slightly less, which I adore. Because let’s be real, I’m never ever going to iron a pair of shorts. Who the hell am I?

I made no changes to the pattern except to use a zipper instead of the snaps recommended because zippers are awesome and snaps are dumb. There. I said it.

The fabrics come from two places, the knit is an organic cotton from FabricMart.com which I got forever ago and have made so many things out of (I got four yards and boy does that stretch. Get it? Knit? Stretch? I crack myself up.) And the linen-cotton blend is from a wedding gift I made for a friend this summer and had a bit of left over yardage for me!

There isn’t much more to say about this sewing process, except that I originally made these to take to Cape Cod and what with one thing and another didn’t get photographs up there, and the the weather turned cooler and I figured, ah, well, wait for Puerto Rico. But both items were perfect for San Juan in October, and I have to say, I’m a huge fan of the high-waisted 40’s style shorts. Hipster as hell they might be, but I love them. It’s like wearing a skirt but you don’t worry about wind issues as much. Which, by the sea, is a good thing.

A little back view for you. Isn’t the light lovely? It kind of back-lights me, which meant I had to light-correct the photos, but I kind of adore the effect. It gives me a halo, who can hate that? 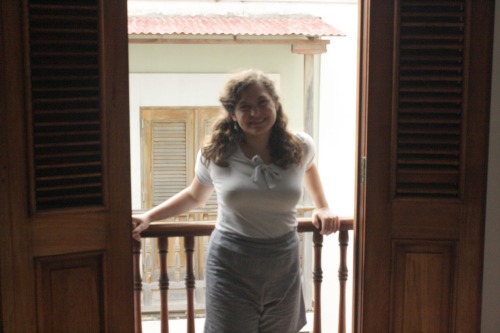 So there you go, a little sea-side ensemble for a house by the sea. The shorts I left in San Juan, they seemed quite happy there.

I know, I know, summer stitching in October? What is the world coming to? I promise, just one more tropically themed post and then I’m back to wools and flannels in a jiffy. Just bear with me, we’ll get there. Oh, we’ll get there. I’ve got big plans for cool weather, guys, stay tuned.