The You Oughta Be Ottoman Shirt

I can’t think of much I hate more than arguing, so it always strikes me as strange that in many places shopping is tantamount to arguing, if you think about it. The culture of bargaining has long been abandoned by many parts of the West, and I can see why, as arguing with someone over the price of things makes me feel like I’m basically telling them their stuff is worth less than they think it is. Which, in a way, I suppose, is the point, that they price it too high and you come in too low and together you presumably reach a reasonable price but I don’t know why I have to be a part of that process, you know? I don’t feel like I’m qualified to be a part of the pricing process, I’m not a pricing professional, you know! There are people out there who say they like bargaining, and I’m sure that is true, but I am not among them.

This is why a family trip to Istanbul a few years ago, while delightful, was also exhausting. The Turks expect you to bargain, they seem to like it, God knows why, and there is this whole ceremony of buying things that confuses all but the most savvy world traveler. That’s another thing, I hate the idea that buying things has to be a whole THING, I want to feel like a ninja, or a tomb raider, I get in there, I get my stuff, I get out. I don’t want to have tea. I don’t want to see ALL of your carpets. I know you have a lot of carpets. Oh, you have another room of carpets back there? That’s fascinating but that’s infinitely more carpets than I want to see because I literally want zero carpets so…nope, yes, looking at the carpets. Sure, more tea, why not.

And then suddenly you’re paying all the Turkish lira in the world for a carpet you don’t want and can’t fit in your suitcase. And you KNOW you didn’t bargain well because they start throwing in free gifts. When they give you gifts, that’s it, you’ve lost, they are literally giving things away because they pity you, they pity how much they are charging you for what you are buying, and their pity translates to small Evil Eye icons and lamps that look like pomegranates (these are both real things we received with goods we were actually buying).

That being said, I never actually felt CHEATED by anyone in Istanbul, which is not the case with an Ebay purchase I bought several years ago which told me I was buying Liberty of London but instead sent me….not that. Only, I honestly wasn’t sure, because I bought it so early in my sewing adventures that I had never actually seen a Liberty of London print, and once I realized my mistake and that creepy jerk of an Ebay salesman had already made off with me money (not THAT much, it was priced at 20 a yard which really should have been an indicator, looking back….) the fabric languished in my stash, as the proof of my folly and terrible buying abilities. The thing is, I like the print, it actually really reminded me of Turkish Iznik tile, which I had adored on that same trip to Istanbul where I realized that bargaining is the worst. I took many photos of this tile, as you can see: 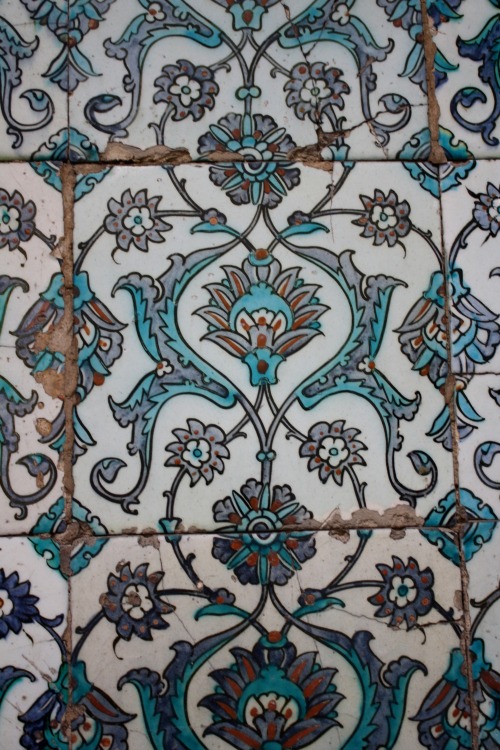 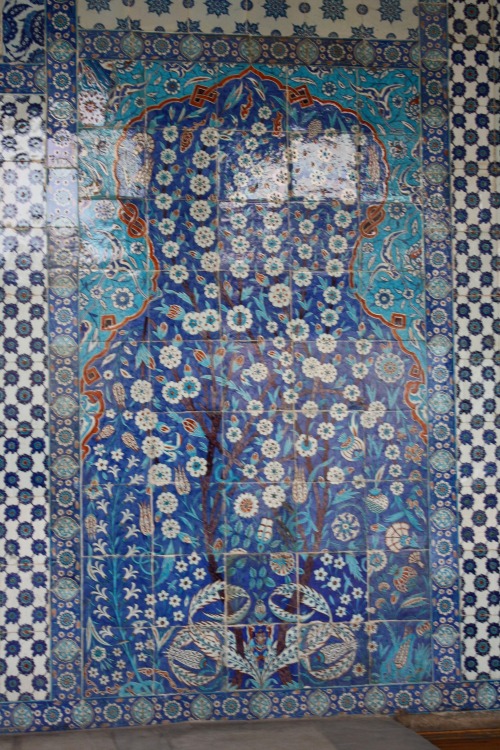 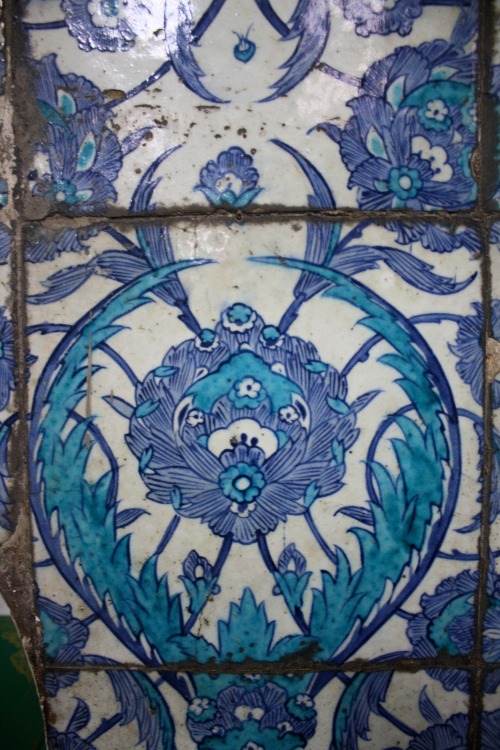 Iznik tile and ceramic is very beautiful, at least, to my mind, and it has a long history as an art form and ceramic process. You can read more about that here, and here, if you want to do so.

So as I said, I wasn’t quite sure what to do with this fabric for a long time. I liked it, but I also felt that it was evidence of my foolishness, my bad buying skills, and the fact that I had been taken in and sold a fake Liberty print, like a manufactured artifact in the Grand Bazaar of Istanbul, which I had skillfully avoided buying, only to be cheated now. But eventually I got over that, because you can only hate yourself for a fabric purchase for so long, I mean, how much time is there in a day, really. So finally I decided to embrace my faux-Liberty (which I now would NEVER mistake for a Liberty print) and enjoy my Ottoman Empire inspired cloth. And this is what I made:

Yay! Another Grainline Archer! I lengthened it a few inches, which no one else seems to have to do, but I feel like it has to be long to compensate for the journey the fabric takes over my chest region, and I like my shirts to hit below my hip if possible.

I am making a weird face here, like I’m not sure why this Turkish man is trying to get me to buy a carpet so badly, like, do I look like someone who NEEDS a carpet in their lives? I must do.

For some reason my machine was acting cruel and insane when I made the buttonholes on this, so they are AWFUL, and you can’t see them. I don’t get it, they made the ones for Mr. Struggle’s shirt JUST fine. Sidenote, I do make things for Mr. Struggle but he wont let me photograph him ever so you will never see those, take it up with him if you are mad.

The archer often pulls a little to the left on me, does anyone else have that experience? Nevertheless I adore it, I’ve made several and have no plans to stop, in fact, I recently cut an Archer dress so that’s on the menu coming up. I do want to try Deer and Doe’s new Bruyere shirt, soon, so that might hop the cue too.

This shirt was fine apart from the button-hole debacle, I like the construction a lot and don’t have any trouble with it anymore, honestly, I think it’s well drafted and I love how impressive it feels to make a collared shirt!

Here is a rather wrinkled shot of the back, but I thought it might make the bright print even clearer for you. Even though this fabric was an imposter, I have to say, I’ve kind of come to love it, having started associating it with Istanbul instead of with my being gullible. After all, even when you get cheated in Turkey, it comes with a little gift and a cup of tea, so really, how bad can it be?

There you go! Istanbul-inspired in more ways than one. I should go back there, I can blend in with the landscape now…