The Recipe For Disaster Dress

It is excellent advice, in a sea of far too much advice, that Polonious gives to his son, Laertes: To thine own self be true. Of course, it comes with a bunch of other stuff around it that is questionable, I mean, neither borrower nor lender be? I think the banking industry would have some issues with that one. Do not dull thy palm with entertainment/ Of each new-hatch’d, unfledged comrade? That’s basically telling him to never make a new friend. Don’t you want your kid to have FRIENDS, Polonius? Jesus. But the worst one for me is probably: give thy thoughts no tongue, which is just….I mean. That’s pretty much, like, my entire personality and career. So THANKS, Polonious, for that nugget of wisdom. But the last thing he says, the be true to yourself thing, is pretty good, and often quoted by many, and we all like it, right? It’s very new-agey for an Elizabethan writer. You can just imagine the teenagers who went and saw Hamlet at the globe and then came home and were like MOM I’m not GETTING married or getting APPRENTICED or ANYTHING. I’m becoming a LUTE PLAYER because that’s who I really AM. I’m being true to ME. It’s a wonder that play wasn’t banned, I swear.

But the point is, you SHOULD be true to yourself, really, I do believe that, and that starts with knowing yourself. But that said, I do sometimes make things that, despite real and sincere efforts towards self-knowledge as an adult human, have nothing to do with me and my life. I mean, I’m the kind of person who should wear a bib at leas 75% of the time, because I am klutzy in the extreme, prone to spilling, dripping, splattering and dropping anything and everything on myself within mere minutes of donning a light-colored ensemble. And yet, for some reason, my clothing for the past few months has been trending towards a color I should really avoid, purely because I rarely treat it well. Yes, that’s right, I’m talking about white. White, whose pure expanse I ruin with coffee, sauces, dirt, lipstick, you name it, I’ve done it. There isn’t a white I own that I haven’t spilled something on. Truly I, like Laertes, ought to be true to myself, shouldn’t I? I should be true to the me that spills and wear clothing made out of whatever fabric those absorbent Dockers are made of, honestly, because that would probably be the best bet. Or some kind of laminated fabric, raincoat material. Or all black, all the time.

But for whatever reason, it seems that I have had a growing attraction to said color this year. I’ve been flirting with all white dresses this year by making a bunch of things like this, and this, and this, that aren’t all white but are MOSTLY to 50% white. But this time? I went all the way. WHY? Why did I do this? When I put this dress on, what’s-his-face was like, are you sure you want to wear that? We are going to lunch and you….and then he discreetly trailed off. He blamed Indian food, which he said has the propensity to stain. Yeah. Sure. The FOOD is the problem.

I ditched this number for the lunch, but put it back on again for a friend’s birthday, and of course I spilled on it, and life went on. The truth is, I like white, and I spill on everything, and I just have to accept that. Perhaps THAT is being to mine own self true.

Enough with the philosophy! To the dress:

I used my typical bodice block, which I wanted to be a bit loose because I knew it would have to fit over a slip, so I added two inches at the side seams, and I pleated up a skirt. Pockets, natch, self-drafted sleeves that are a bit floofier than I had wanted but they’ve grown on me, and that is about it, honestly.

Love a pocket! Don’t you?

See, a little self-conscious of the floofy sleeves. But the pleats look nice in this one! The fabric is really the star here, I believe:

I love the vertical pattern of the eyelet, I think it makes it less cutesy, although this is still solidly in the cutesy category, and more clean. I got it at Thakur, of course, my new favorite. 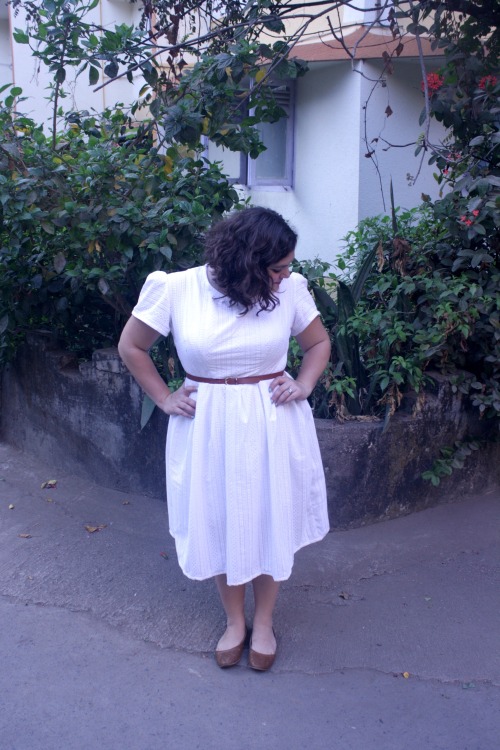 I would say, stains aside, white is quite nice in the Mumbai heat.

Side view for ya.

So there you have it. A dress that would probably be better for someone who isn’t me, but the heart wants what the heart wants. Maybe that’s the real problem with Polonious’ advice, that one’s own self is sometimes a bit of a conundrum, confusing even to the self that one is. Ah, well. For as long as I have this dress and don’t stain it irrevocably, I like it!